Conversations from Campus: The Invitation 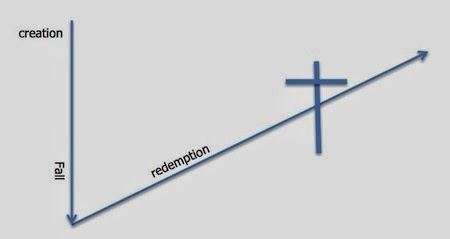 Fifty students watched as I drew the above diagram on the board. I explained it something like this:

“In Christian theology the Fall away from God was so severe — and God was so grieved — that he didn’t fix the world all at once.

He let it fall.

He allowed the consequences of rebellion to be played out in our timeline.

Thus the world is full of pain and suffering.”

I continued: “Slowly, gradually, he began to restore the world through Israel, and even visited the world himself in the person of Jesus, the Messiah.”

“How do you know Jesus was the true Messiah?”

I replied that Jesus fulfilled the Hebrew law and prophets and descended from King David.

I said Jesus claimed to actually be the temple himself.

As for peace, God calls his people — the church — to go forth in his power, bringing healing to a broken world.

Afterward, we talked. Good guy, frosh, grew up Jewish but rejected the idea of there being a “chosen people” or a God who chooses.

The lesson for you and me in this encounter?

Not what I said to Jewish-Atheist, though I have no regrets.

Rather, it’s that a faithful Christian student met him at an outreach table in the Student Union and invited him to attend my talk.